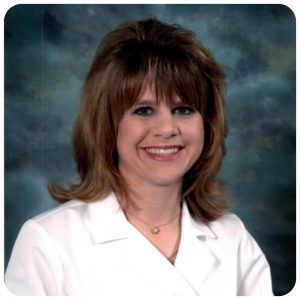 At 6 years old, Patricia ‘Mara’ Wright moved with her family to North Florida, becoming a Gainesville resident. Growing up with the University of Florida in her backyard in the 1970s, she still dreamed to become part of the Gator Nation even after moving to South Florida for high school.

“From the time I was a little girl, I had a seed planted in my head that it was ‘UF or bust’ for me,” Wright said. “Even if I would have gotten into Harvard, I still would have chosen UF.”

But for most of her life, this dream was just out of reach. Following her move, she pursued a career in health care after motivation from her stepfather, James, to pursue her passion to care for others. The pair’s late-night study sessions covering medical terms and other health care topics filled her childhood and also provided a strong foundation for success in nursing.

But as she graduated from high school, finished college and steadily advanced in her career — from a licensed practical nurse to a registered nurse — Wright found it difficult to find enough time to return to school full-time and earn her BSN. She was also discouraged by the length of time she spent outside of school in the working world and believed that a UF nursing degree would always just remain a dream.

In 2012, Wright began her current role as a nurse educator in long-term care, but soon found that her lack of a BSN was an obstacle in advancing her nursing career.

“It was one heck of a motivator,” Wright said. “I would constantly look at job postings to advance my career, but just having an associate wasn’t enough to clear the bar. I knew then I needed to make a change.” 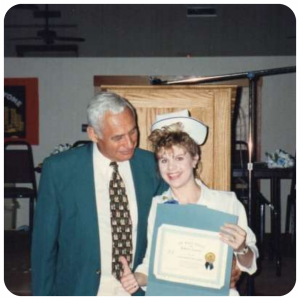 Spurred by her desire to push forward into nursing management, as well as achieve her UF dream, Wright decided to enroll in the UF College of Nursing’s RN-to-BSN program, a fully online program designed for working nurses that allowed her to maintain her clinical schedule while also pursuing an education. She was accepted in 2019.

The transition from the bedside to the virtual classroom was not easy, but for Wright, mentorship and strong support from her husband made the difference. Although she attended courses virtually, College of Nursing faculty worked with her to make sure that she fully understood each assignment and had answers to any questions. According to Wright, the caring nature of instructors at the college have motivated her desire to mentor what she calls “little buds.”

“We have a saying in the profession that ‘nurses eat their young.’ It’s notoriously hard for young nurses to get guidance that will help them further their career,” Wright said. “But I don’t want that for any of my mentees. They are our future, and I want to make sure these buds coming out of soil get plenty of sun and water.”

Every day, Wright says she learns something different that can be applied to her real-life clinical practice. Her goal during the program is not to check a box, but to fully dive into the material and use it as a foundation for knowledge in leadership roles, as well as make herself a better nurse.

Wright also has the grades to show for it – she was named to the Dean’s List, a record on students whose academic success reflects the college’s standard of excellence, three separate times.

“I know that what I learn inside the ‘walls’ of the classroom applies to our practice,” Wright said. “We learn cutting-edge techniques from expert researchers in the field. I proudly tell my mentees that a nursing degree through the UF RN-to-BSN program will allow you to take your career to the next level. I only wish I had started sooner.” 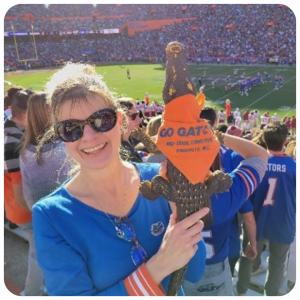 Just two semesters before her finish line of graduating from the program, Wright’s close family faced the unthinkable. Several members of her family contracted COVID-19, which eventually led her aunt to become severely ill and her uncle dying from the disease.

Still determined to finish her college career strong, Wright recently became a part-time caretaker for her aunt as she balanced clinicals, classwork and her professional responsibilities. She wanted her UF Nursing degree like nothing she had ever wanted before.

The semester before her graduation and 40 years after her time in Gainesville, Wright attended her first football game as an official Gator Nurse. During a stadium-wide chant of “Won’t Back Down” by Tom Petty she recalled how she kept pushing forward to achieve what she believed to be impossible, proving to herself and other nurses that it is never too late to accomplish one’s goals. She hopes to proudly feel the same Gator spirit as she walks across the stage during her graduation in April 2022.

But the one individual she hopes could witness her achievement the most? Her stepfather, who passed in 2014.

“There’s one thing I’ve come to realize during my life — it’s that life is very short,” Wright said. “You need to do things that fulfill you. And earning my BSN at UF, finally filling that ‘hole’ and knowing that the person in my corner from day one can look down and be proud of me — now that’s a dream come true.”

Story orginally published and written by the UF College of Nursing. Read the original publication here.

The number of RNs earning their BSN degree continues to grow, and now is the time join top nurses with this credential. The RN to BSN program from the UF College of Nursing offered via UF Online accepts new applicants every spring semester. The deadline to apply is quickly approaching this August 29th to start classes in January 2023. With this program, you’ll prepare yourself for leadership opportunities in the nursing field. Interested in learning more about this major? Visit the UF Online degrees page.