Great accomplishments rarely happen overnight. For Julie Cochran, the journey to earning her Bachelor of Arts in Criminology has taken ten years. She never imagined that she would graduate at the same time, from the same university, with the same degree as her daughter Emily.

Julie, 51, is a mother of three, works a full-time job, and is now a University of Florida graduate. While the journey to earning her degree has been a long one, the opportunity to graduate alongside her daughter has been well worth it.

Majoring in Criminology Runs in the Family

It wasn’t difficult for Julie to decide on a major, as she has always been interested in the field of criminology. Currently, Julie works as a paralegal at a private law firm, and she has worked in the court system her whole career. “I always wanted to be a lawyer, then never went on and finished school,” Julie said.

Julie’s interest in criminology also rubbed off on her twin daughters, Emily and Madison. They both earned their bachelor’s degrees in this major as well. When it came time for Julie’s daughters to decide on which university they wanted to attend, Emily chose UF, while Madison chose Florida State University in Tallahassee, Florida.

Though Julie’s daughters attended their criminology classes on campus, the three of them were still able to discuss the topics they were learning in their courses. For Julie, the UF Online criminology program worked a lot better for her learning style compared to in-person courses. “If I have to stop a video lecture because something happens and I have to get up,” she said, “it gives me the ability to take a break and come back to it later.”

One of the professors who stood out to Julie in the UF Online criminology program is Dr. Tiffany Jenson. Julie took Professor Jenson’s Research Methods course and was in awe of her dedication. “When Professor Jenson says she wants you to be successful, she means it. She was a great inspiration through this,” Julie said. “If every professor that I’ve had in my college career was like her, my college journey would have been a lot different.”

Professor Jenson also recognized Julie’s tenacious attitude and was inspired by her resilience to continue her education as a mother. When talking about Julie, Professor Jenson said, “she is the ultimate role model for parents sending children away to college and recognizing that they can realize their dreams as well, alongside their children.” She went on to say, “sometimes the greatest Gators don’t live in ‘the swamp,’ but they swim just as fast and are equally important in Florida’s ecosystem.”

The Journey to Becoming a Gator

Enrolling at the University of Florida was Julie’s goal from the start. She was accepted to UF when she graduated high school, but going away to school wasn’t financially feasible for her. She decided to attend Polk State College, which was local to her home in Bartow, Florida. Julie was four credits shy of earning her Associate of Arts (A.A.) degree when she decided to drop out and focus on her career and family.

In 2010, Julie decided it was time to go back to school. She wanted to finish what she started. “I have always preached to my children that they have to go to college. It was never one of those things that they may or may not do,” Julie said. “They just knew when they graduated high school that they had to go on and get at least a four-year degree.”

While Julie knew it wouldn’t be easy, she wanted to set an example for her children, following the same advice she gave them. When she returned to Polk State College, she didn’t receive news she wanted to hear. The advisor that was helping Julie changed her major, turning the four classes she needed to finish her degree into eight instead. At this point, there was only one thing for Julie to do: continue pushing through. “I had three young kids, so I did a class a semester for five years until I got my AA,” Julie recalls.

After taking all her classes in person for her A.A. degree, Julie started looking for an online bachelor’s program that would give her the flexibility she needed as a working mother. Once she found the University of Florida’s online undergraduate program, UF Online, she knew she needed to apply. “I got in once, I figured maybe I can get in again,” she said.

Since UF was the university she had always wanted to attend, Julie remembers feeling emotional when she received her acceptance to UF Online. “I actually cried a little because here I am some 20 years later,” she said, “and I’m finally doing it!”

Finishing What She Started

As Julie looks back at the last decade of her life, she feels a huge sense of accomplishment and relief. The last year of her education has been especially challenging, as she took on extra courses to graduate at the same time as her daughters. Even taking three to four classes a semester, Julie has maintained a 4.0 GPA.

While Julie thought her daughter Emily would be embarrassed about graduating with her, Emily feels the complete opposite. “Not many people can say that they go to the same university as their mother and have the same major,” Emily said. “I am very excited for the day we get to receive our diplomas together.”

Julie truly stands out as a role model for her children. “My siblings and I are all inspired by her work ethic and tenacity.” Emily continued to say, “I have learned from my mom that I will always have the ability to motivate myself and accomplish anything I set my mind to.”

Now that Julie is done with her degree, she plans to take a year off to spend time with her husband. She has also considered earning her master’s degree in the future. Both of Julie’s daughters plan to earn their master’s degrees and continue working in the field of criminology.

Overall, Julie’s advice to other parents who are also students is to remember that “one of the biggest things of what we are doing is the example it sets for our children,” she said. “I’ve come close to throwing in the towel a couple of times, but the reason I stuck it out was that my kids came to me and said ‘mom, you can’t.’” 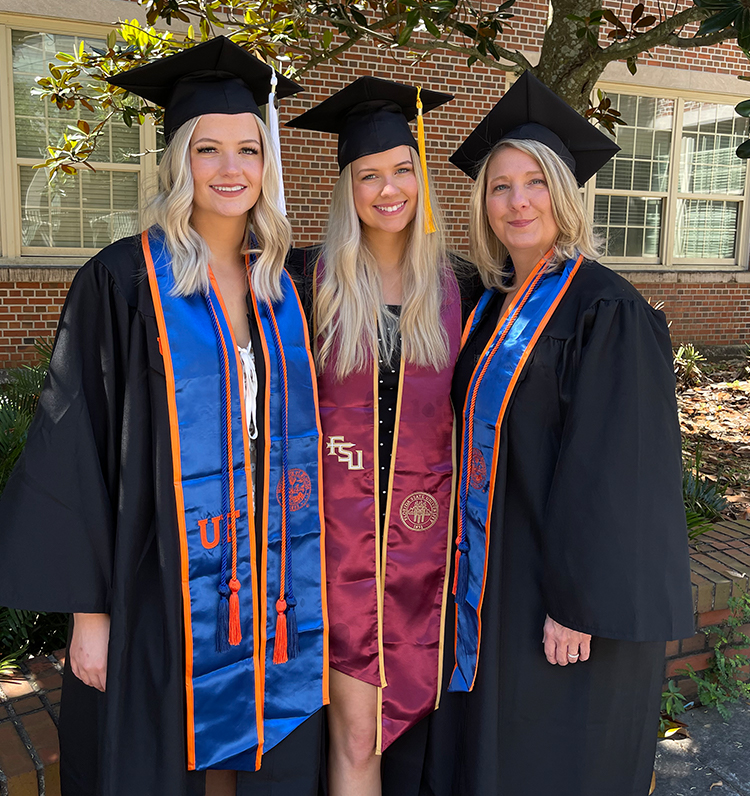 Julie and her daughters in their graduation outfits. 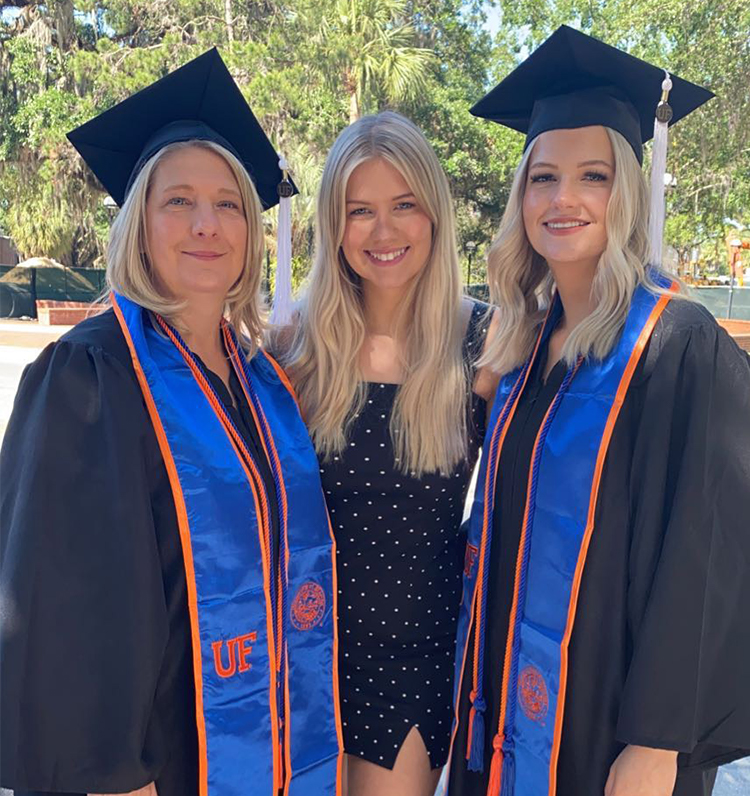 Julie poses with her daughters at UF’s make-up graduation. 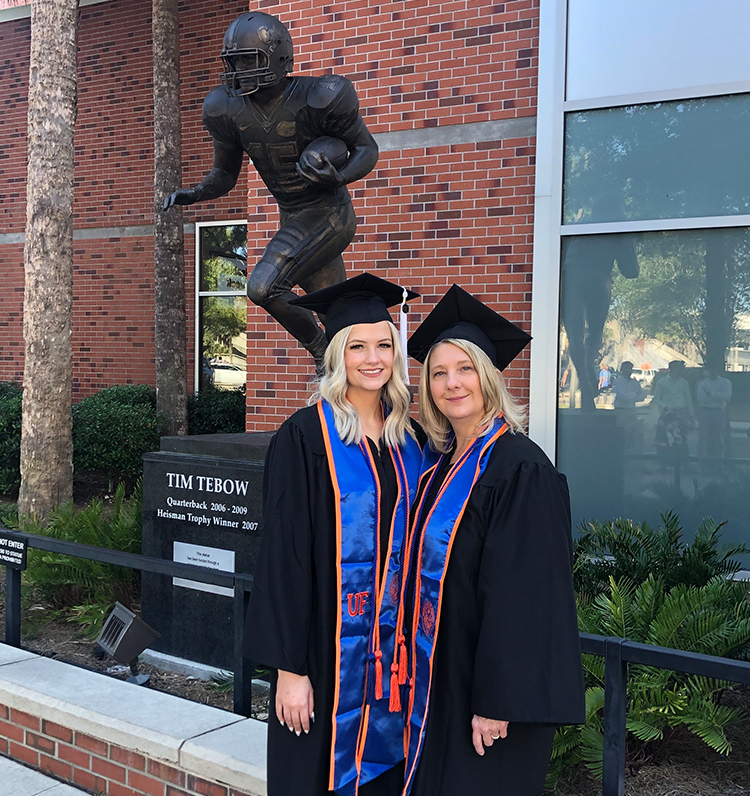 Julie and her daughter pose in front of the Tim Tebow Heisman statue. 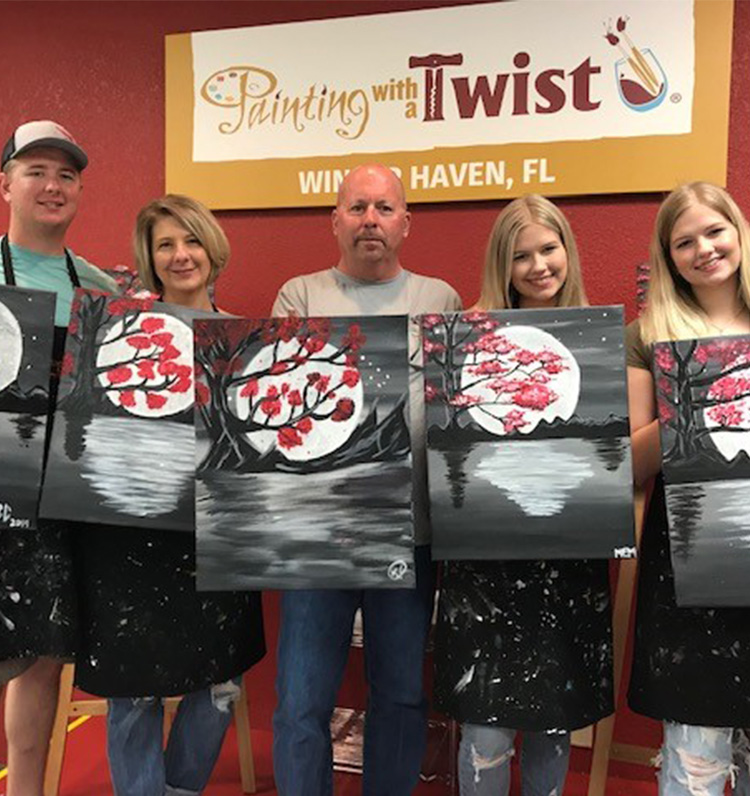 Julie and her family at Painting with a Twist. 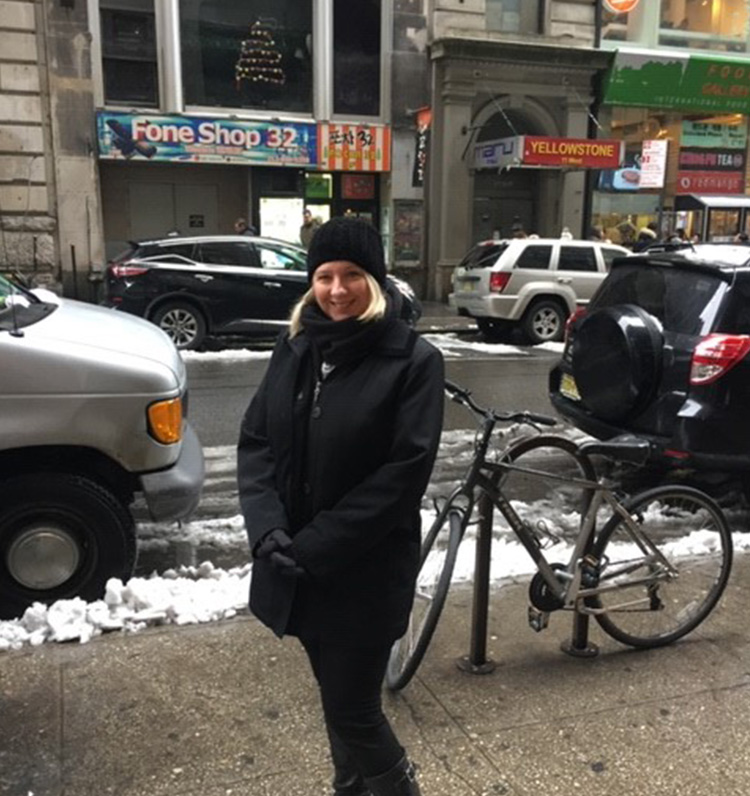 One of Julie’s favorite things to do is traveling. 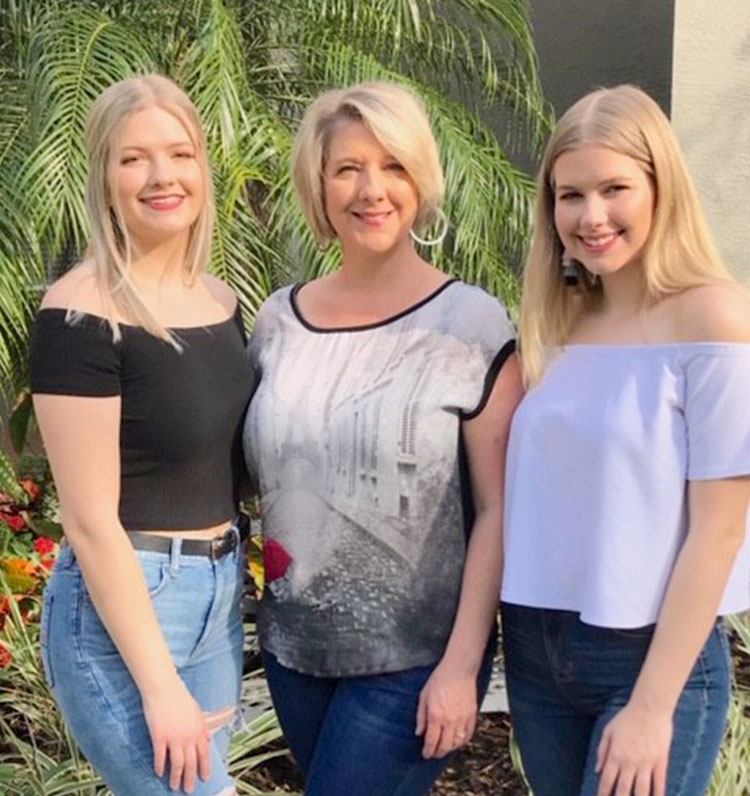 Are you interested in a career in the criminology field? Offered through the College of Liberal Arts and Sciences, the UF criminology major via UF Online teaches students the interrelationships between features of law and society. This major prepares graduates to continue their studies in law or graduate school. Visit the UF Online degrees page to learn more.