It’s not every day that you find out one of your Gator peers was a finalist on America’s Got Talent. As surprising as it may be for his classmates and professors, Dariel Liakhovetski, 19, was a viral sensation along with his brother for their impressive musical performance on the hit television show. While Dariel continues to perform around the world, he hasn’t given up his childhood dream of becoming a dentist. By transferring his credits to UF Online, Dariel is able to continue working toward his bachelor’s in Microbiology & Cell Science from the University of Florida College of Agricultural and Life Sciences (CALS). With UF Online, Dariel has the flexibility to complete his coursework from wherever his music career takes him. By not giving up his commitment to music or his education, Dariel has proven that there are no limits to achieving success as a UF Online student.

From music to science

In 2014, Dariel and his brother Emil took the stage to perform their impressive cello duets in front of millions of viewers on the popular TV show America’s Got Talent (AGT). At the time, they were teenagers who had big dreams of doing what they love most- playing their cellos together. Their grandfather, who came to the United States from Russia with nothing but his cello, taught Dariel and his brother everything they know about the instrument. That’s why when they had the opportunity to perform on AGT, they used their electric cellos to bring a new twist to the classical instrument, performing the legendary rock music of Jimi Hendrix, and the bands Metallica and Nirvana. Not only did their performance shock the judges and bring tears to their grandfather’s eyes, they also earned many votes from viewers all over the United States.

The Liakhovetski brothers on America’s Got Talent

The Liakhovetski brothers landed a spot in the finals, but Dariel never let his childhood dream of becoming a dentist fade away. “It was incredibly fulfilling [to perform],” Dariel said. “As initially enticing as it was for a 16-year-old to travel the world and be a rockstar for the rest of my life, I didn’t want to give up my greatest dream of getting an excellent education and becoming a dentist.”

Prior to attending UF, Dariel was enrolled full-time at Florida Atlantic University in his hometown of Boca Raton, Florida. Dariel remarked that his education became more challenging the busier their music schedule became. As performances increased, Dariel knew he needed to find another university program that would better suit his needs as a musician and student.

That’s when he came across UF’s flexible undergraduate online program, UF Online. The strong reputation of UF Online’s Microbiology and Cell Science degree caught his interest. “I was really blown away by everything [the program] offered. I pretty much fell in love with it and decided to apply,” he said.

A passion for Microbiology & Cell Science

Since starting the UF Microbiology and Cell Science program in 2018, Dariel’s love for science has only grown stronger. He’s also discovered that being a Gator via UF Online doesn’t limit his interaction with classmates or his learning. In fact, UF Online opens up opportunities he didn’t have before.

“I’m able to take exams and quizzes while I’m on a plane. I’m able to study from a hotel room, travel anywhere in the world and be completely involved,” Dariel added. “This program makes it possible for any student to pursue the highest level of undergraduate education in one of the world’s highest ranked microbiology colleges.”

As a UF Microbiology and Cell Science major, Dariel is required to take an accelerated in-person lab that is taught over five days. To meet this requirement, Dariel came to UF’s Gainesville, Florida, campus in the summer and was very impressed with the experience. He was also inspired by meeting his fellow classmates. “There were some students working full-time in a hospital, who were raising five kids, or who were chefs. There were so many different students, and they were so thrilled that this program provided them with the opportunity to become future leaders in medicine, biological research, veterinary medicine, or dentistry.” Dariel noted that, “it’s amazing that this program opens so many doors for non-traditional students.”

By making these connections with his Gator peers and professors, excelling academically as a UF student, both online and in the labs, Dariel was offered the opportunity to become a teaching assistant (TA) for a few of his courses. As an undergraduate TA, Dariel assists a group of students by grading their assignments and answering any questions they have over email or through Zoom video calls. “Being a TA has been one of the most rewarding parts of my undergraduate studies,” he said. “I’m so happy that I’ve been able to connect with students and build such wonderful relationships with them through assistance in teaching. Those student relationships are something I value tremendously.”

As a UF senior, Dariel has earned a new recognition. Each spring, CALS recognizes its Top 10 Seniors, outstanding students who exemplify the highest standards in the college experience, academics, campus involvement, community service, research, and more.

Announced earlier this year, Dariel is among CALS’ Top 10 Seniors and received the Emelie L. Matthews Award of Excellence. This award recognizes an outstanding CALS senior who came to UF as a transfer student. Dariel’s academic performance, dedication, and service to the UF Microbiology and Cell Science program and students has set him apart. From his music accomplishments to his academic track record, Dariel is demonstrating what is truly possible when a Gator forges their own path through UF Online.

“I consider myself incredibly fortunate to be a student in UF’s Microbiology and Cell Science program, as it has gone far above and beyond in preparing me for my professional training in dental school,” Dariel said.

The University of Florida is proud to celebrate the success of Dariel and all Gators who are often juggling successful careers outside the classroom while also excelling in their education. These students prove once again that with the right determination and talent, all within a strong yet flexible learning environment, a Gator can truly thrive and positively impact others. It’s great to be a Florida Gator. 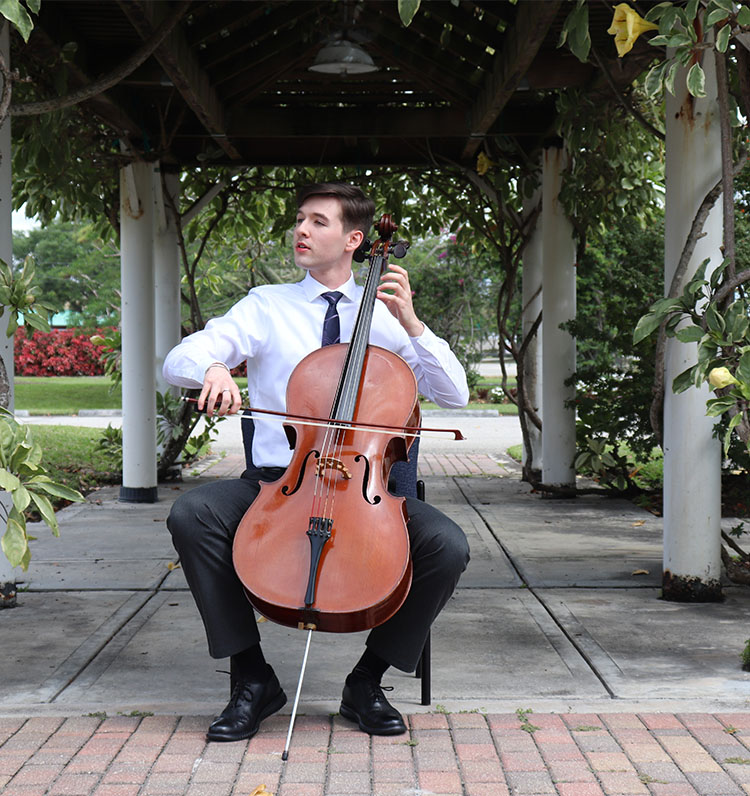 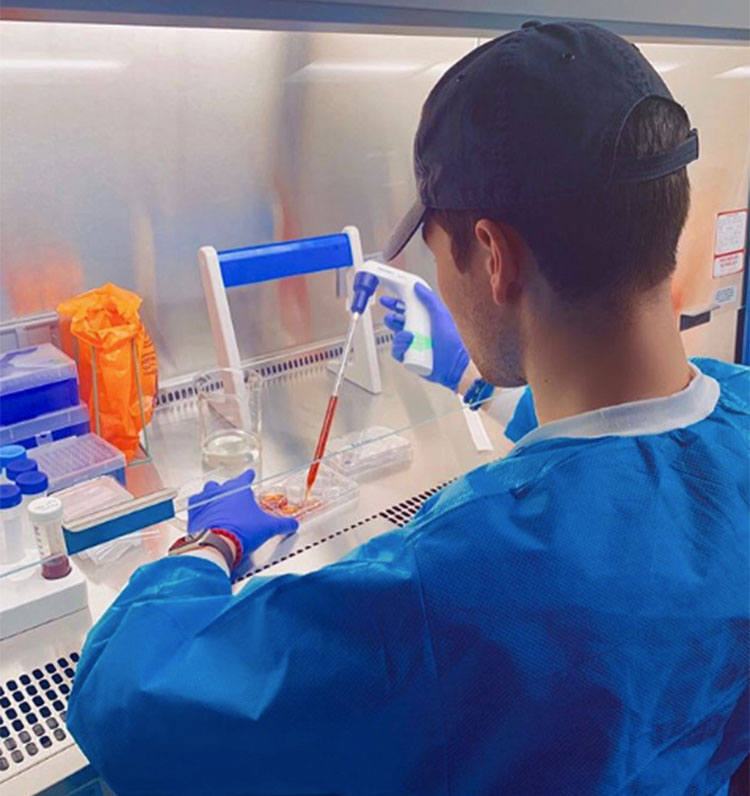 Dariel in the lab for one of the summer bootcamps he attended in Gainesville, FL. 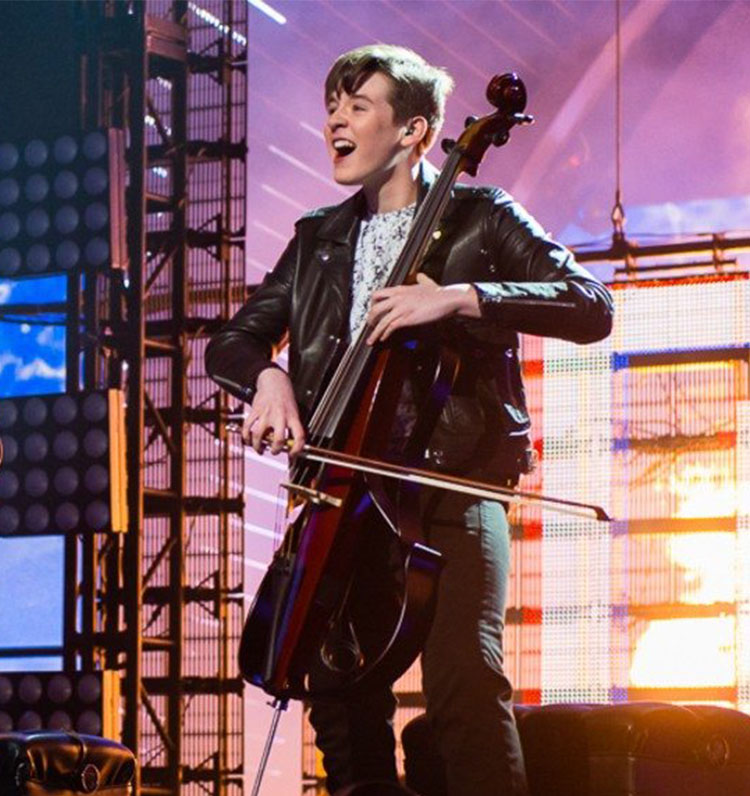 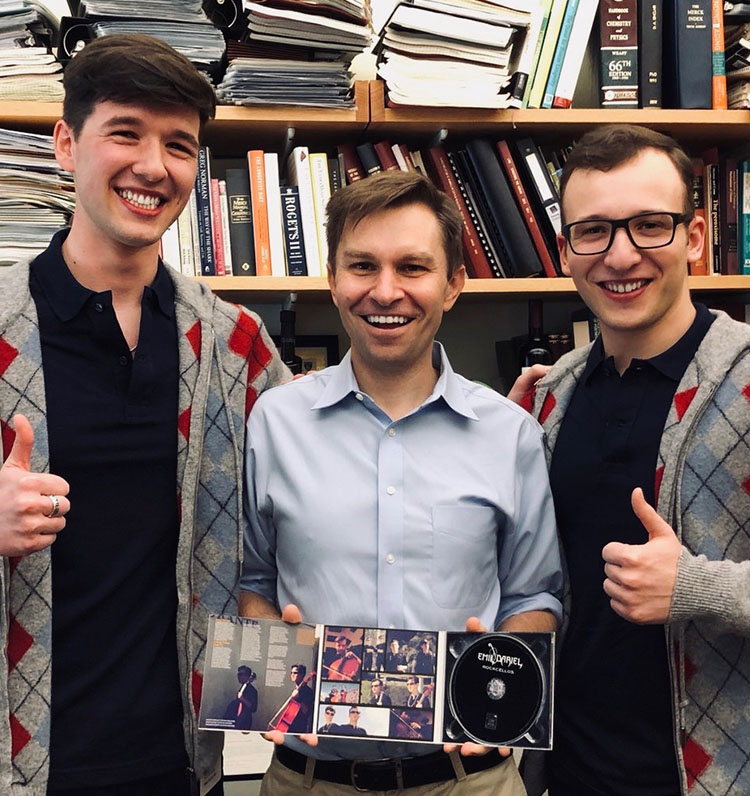 Dariel (left) and his brother Emil (right) met one of their scientific heroes, Dr. David Sinclair, in his lab at Harvard Medical School. Dariel credits UF Online’s Microbiology and Cell Science program for connecting him with Dr. Sinclair. 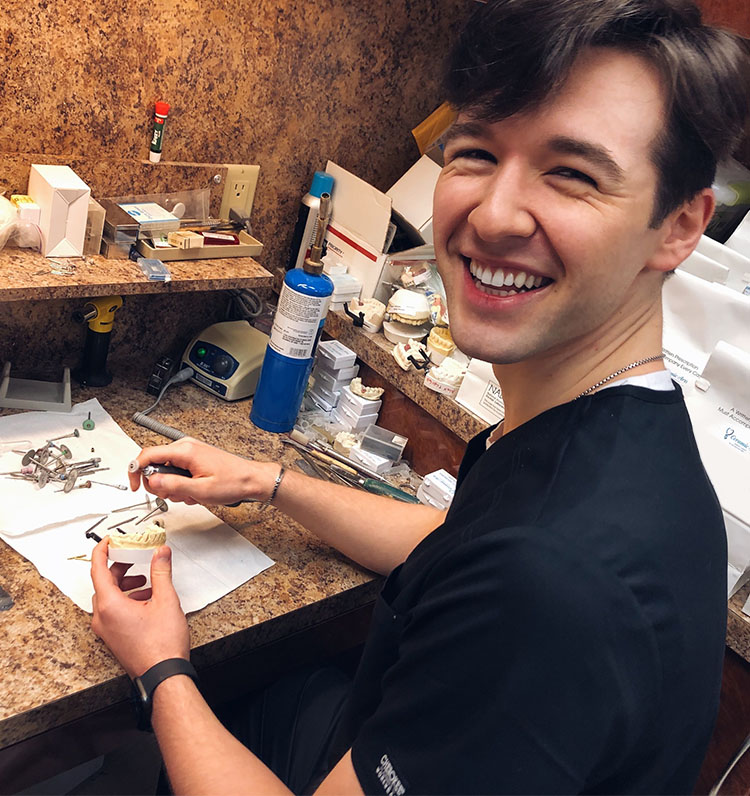 Dariel having fun with trimming models in a dental laboratory. 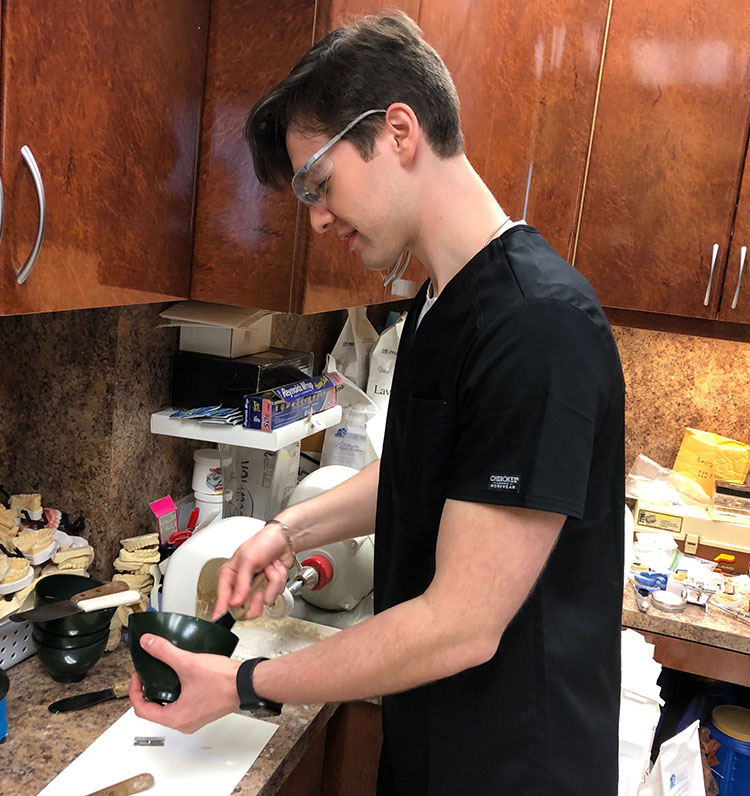 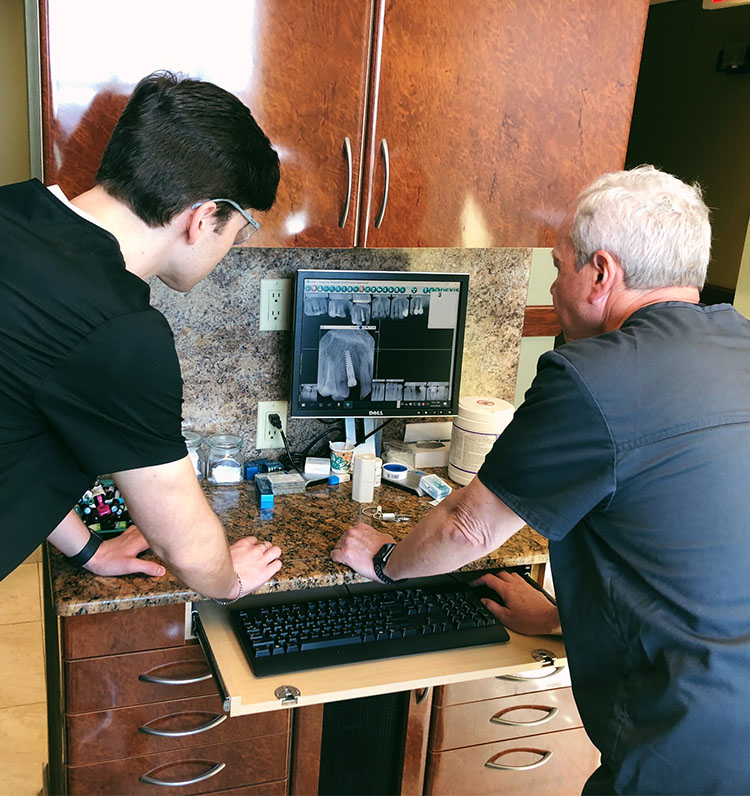 Analyzing a dental implant case with his dad who is a dentist. 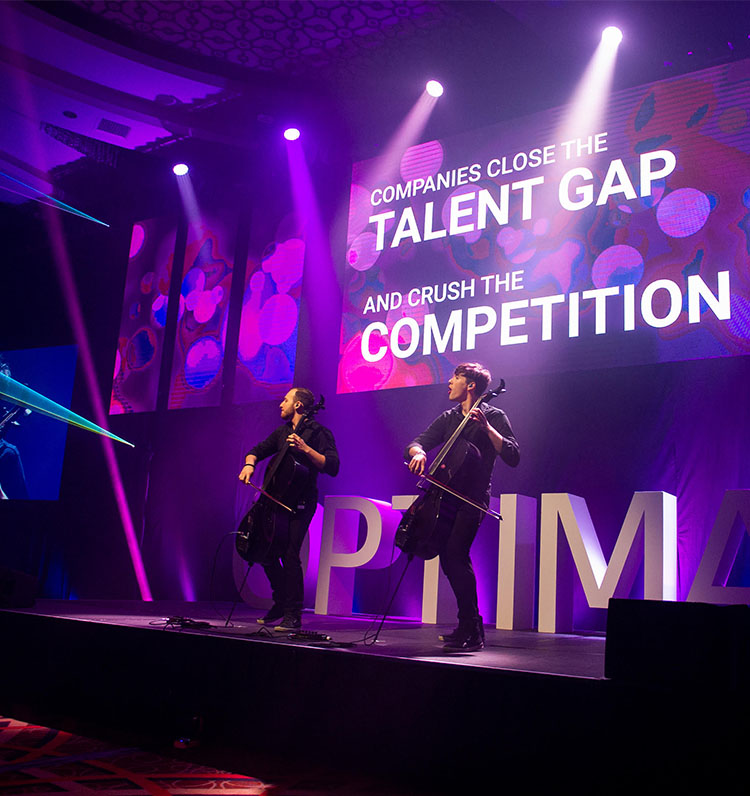 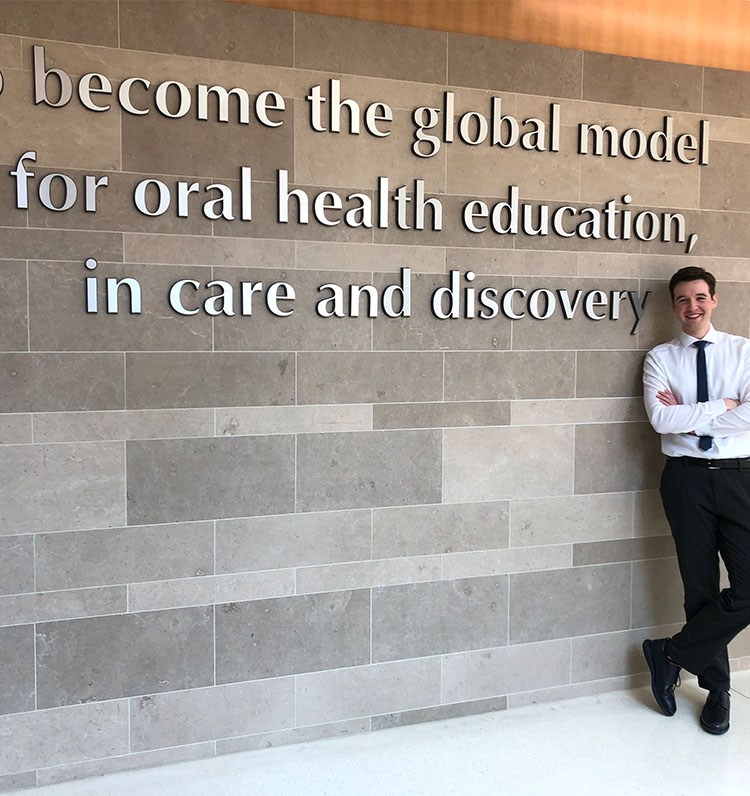 Dariel poses next to a dentistry quote. 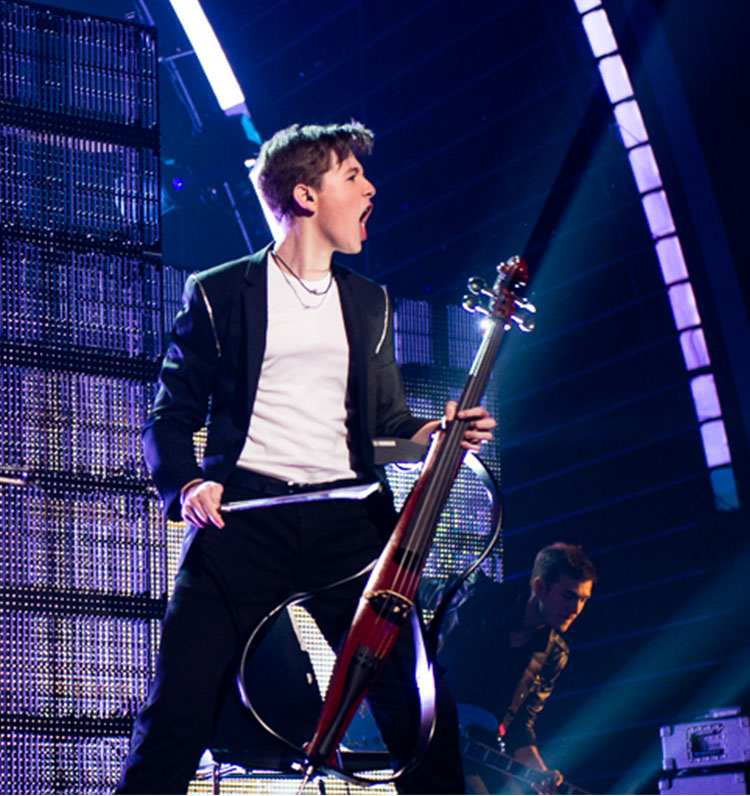 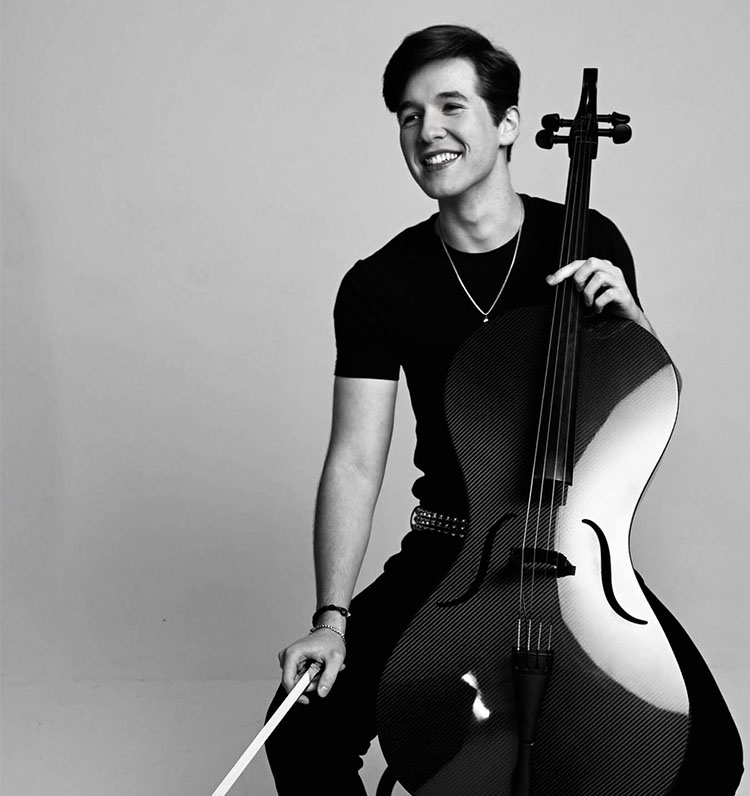 With its combination of engaging courses and lab experiences, the UF Microbiology and Cell Science major offered by the College of Agricultural and Life Sciences via UF Online prepares students for a variety of careers in the sciences, including medical professions. Courses include topics such as molecular genetics, cell biology, virology, immunology, and more. Discover what our Microbiology and Cell Science major can do for you by visiting the UF Online degrees page.