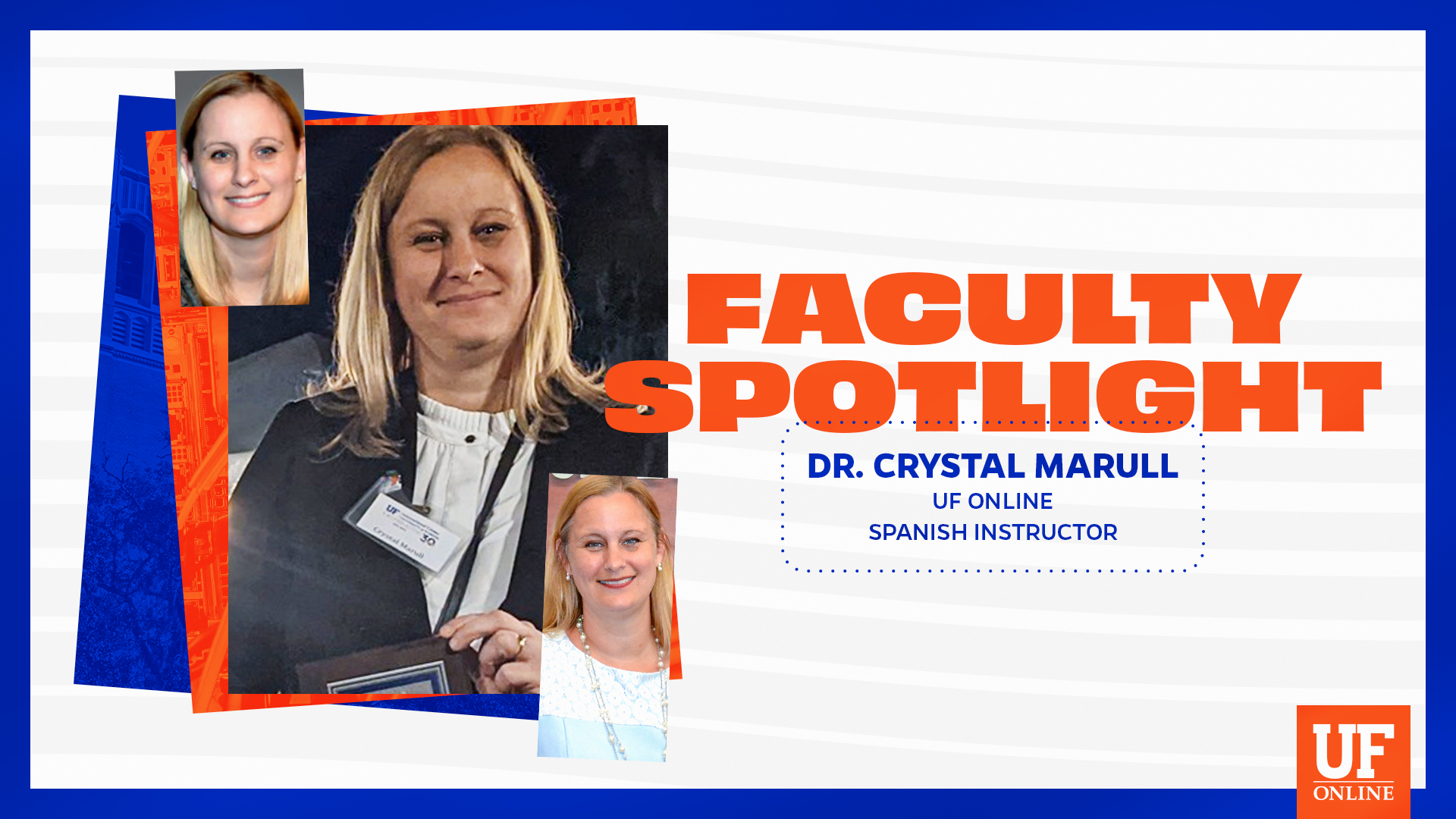 Since becoming a Spanish professor at UF Online, Dr. Crystal Marull has earned recognition from colleagues and admiration from students for her groundbreaking language course. Crystal has revolutionized the way students learn and comprehend language in an online environment, earning her the CLAS International Educator of the Year award. As she continues to implement successful and engaging ways for students to learn Spanish, she is breaking down barriers and redefining online education.

DISCOVERING HER PASSION FOR SPANISH 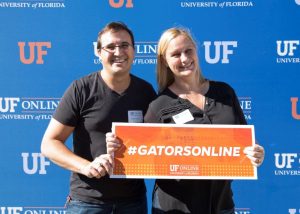 Growing up and attending Neshaminy High School in a suburb in Bucks County, Pennsylvania, Crystal viewed Spanish as a requirement that wouldn’t have any practical application in her daily life. However, everything changed in 10th grade when her high school’s foreign language club offered an 8-day trip to Spain and her parents encouraged her to go. The decision wasn’t easy for Crystal because her trip coincided with her soccer team’s state cup. Going to Spain meant getting cut from the team, but she decided to go despite it being a “big personal sacrifice to go to Spain.”

“When I came back from that trip, I was completely transformed,” Crystal revealed when she first discovered her passion and decision to pursue Spanish. “That was the pivotal experience that changed everything for me.”

Given her fond memories of her high school trip, Crystal went on to study abroad in Spain twice while attending Boston University. After graduation, she got hired by Boston University in Madrid as an office assistant where she worked with students. She later worked for the former Foreign Minister of Spain, where she met high-profile figures like Colin Powell. “I met the president of Spain and the Mayor of Madrid,” Crystal fondly recalled the unique opportunities she had while living in Spain.

While living in Spain for seven years total, Crystal met and married an Argentine who recovered his Spanish citizenship and became an architect. The couple had their first child while living in Spain before deciding it was time to move back to the United States, where they had a support system to help them raise their family and an easier time advancing their careers. Upon returning to the US, Crystal had a second child and received a Master’s in Education before attending Rutgers University to receive a PhD in Bilingualism and Second Language Acquisition.

After earning her doctorate, Crystal was offered a job at UF Online and moved her family to Florida. “I absolutely love what I’m doing and it’s the perfect job for me,” Crystal praised her position at UF Online. After accepting the position, she went straight to work improving the online format that existed before she took over SPN1130: Online Beginner Spanish I and SPN1131: Online Beginner Spanish II. “It’s been a huge and fantastic challenge to think ‘how can I successfully teach the Spanish language in an online environment?’” Noting the importance of conversation practice when learning a new language, Crystal turned to Lingua Meeting—a program that pairs students with native speakers living in other countries. “The thing I’m most proud of that we’ve accomplished in the past year is working with this coaching company,” Crystal noted the positive changes in her students’ language comprehension.

“Relationships are really at the base of language learning. I realized I can recapture that element virtually,” Crystal said. “The conversations were so personal, authentic, and organic.”

Crystal’s students are often most hesitant to produce and speak the language as opposed to easier tasks like reading and writing. “My model is all about production,” she said. By reversing the language learning model to focus on the harder task of production first, students find their skills easily transferable to simpler tasks. “The feedback from students has been absolutely fantastic,” Crystal noticed the drastic difference in student learning due to their relationships with the native-speaking coaches and decided to permanently incorporate it into her course. Its popularity and success have inspired other institutions to seek her advice and guidance to adopt her model of online language learning into their own programs.

Crystal’s groundbreaking online Spanish course earned her the CLAS International Educator of the Year award. “I’m just so honored and blessed,” she said about winning the award. “Who would think that the online program would get the international reward?”

Given her fascination with how people learn languages, Crystal realized that positive perception and motivation were key to student success. Most students take her course as a language requirement for their degrees and they’re initially nervous about taking a foreign language online. “I’m much more focused on their receptivity and attitude toward the language because language learning is a journey,” Crystal said. Despite a student’s initial apprehension toward the course, their developing relationship with their coach often puts them at ease. “This is an opportunity to give them a taste of authentic engagement and it’s tremendous for motivating their interest in the language and culture.” 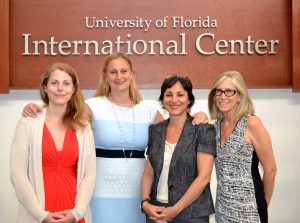 Crystal has been encouraged by the positive relationships her students develop with their native-speaking coaches, with some students even traveling to different countries to meet their coach in person. “It’s not study abroad, but it’s the closest thing we can give somebody that’s in an online engagement with this language and culture without leaving your living room.” Her course has also opened up new doors for her students they never expected, like being able to speak to spanish-speaking family for the first time or move to other countries. “I know [the course] is successful because at the end of it, the majority of students are asking ‘how can I keep learning?’”

“Covid has made everybody reevaluate what education can look like,” Crystal discussed the advantages of online learning. “This model works. Online isn’t inferior to classroom instruction, it’s different. For me, this is an opportunity for accessibility.” Crystal hopes that other institutions and courses can benefit from what she’s discovered through her own course. She also accredits her supportive and skillful Course Assistants, Sonia San Juan and María Hernández, for helping her carry out her vision at UF Online. “I love UF Online. I love my colleagues. I love the organization of UF Online, which has been dear and special to me.”

“UF Online has been fantastic in the way it’s growing and I’m just really happy to be a part of it,” Crystal discussed finding her purpose and inspiring her students. “I love it because I do feel like I’m serving a higher purpose. It’s not just teaching a language, it’s transforming lives.”

Students at the University of Florida can enrich their educational experience by participating in one of the many study abroad programs offered through UF Abroad. UF Online students can take advantage of these opportunities to foster professional, academic, and personal growth. Participating in study abroad will help you gain a global perspective from experiencing different cultures first-hand. Students who are interested in studying abroad can learn more at the International Center’s study abroad portal.