This is a survey course of urban civilizations across the globe, from the earliest roots and variations to modern times. The course will examine major world traditions and periods of urbanism, from earliest examples to modern times, stopping off at various points across the globe to elaborate specific instances of urban development and regional trajectories of change.

The course takes the basic approach of anthropological archaeology, but also includes Western history, urban studies, and cultural studies, as well as other social and ecological sciences. It focuses on cases of pre-modern (AD 1500) urbanism around the world, but also considers more recent development during the Industrial Revolution and twentieth century globalization and mega-cities, including questions of sustainability, social inequality, and globalization. It integrates archaeological and historical case material to explore cities in all parts of the globe, to elaborate specific instances of urban development and regional trajectories of change.

In 2006, for the first time in history, the population of people living in cities outnumbers that in broadly defined rural areas. The transition to settled town life and agricultural food production and subsequent “urban revolution” in various parts of the world, is widely considered as the most important process in human history. Urban revolutions entered a new phase with industrial capitalism, beginning in the 18th century, which forever changed the face of global society and environment. Today, understanding urban societies is critically linked to pressing global concerns regarding quality of life, including ecology and climate, and a host of social issues. 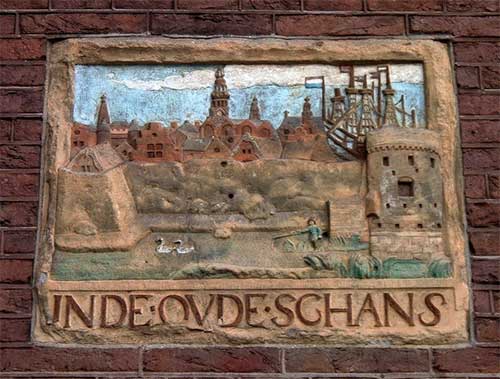 Amsterdam, Netherlands
An old street sign in Amsterdam showing a view of the city in the first half of 17th century.
Image source: http://flic.kr/p/4HbEz9

This course takes a critical look at the origin and development of urban societies, how they are portrayed and compared in Western scholarship, and what articulations exist between scholarly research and debate and broader public audiences, including questions of social inequality and human rights, planning and development, and policy. It’s a survey course of major world traditions and periods of urbanism, from earliest examples to modern times, stopping off at various points across the globe to elaborate specific instances of urban development and regional trajectories of change. Major contemporary cities, such as, Cairo, Bagdad, Islamabad, Beijing, Rome, London, Benin, Mexico City, Cuzco, São Paulo and others, and then zoom in or “excavate” specific places and cultural memories to reveal diversity and change in these early urban traditions. It uses case studies from most major world areas to reflect on general characteristics of urban civilizations, including their form, social groups and relations, symbolic meaning, and historical ecology.

What questions will this course ask?

Jaisalmer A city in the Indian state of Rajasthan founded in 1156 BCE.
Image source: http://flic.kr/p/bDTGXv

The course is divided into six modules:

Talk to your Academic Advisor to see how this course could fit into your academic plan. We’d love for you to join us in this online learning adventure.